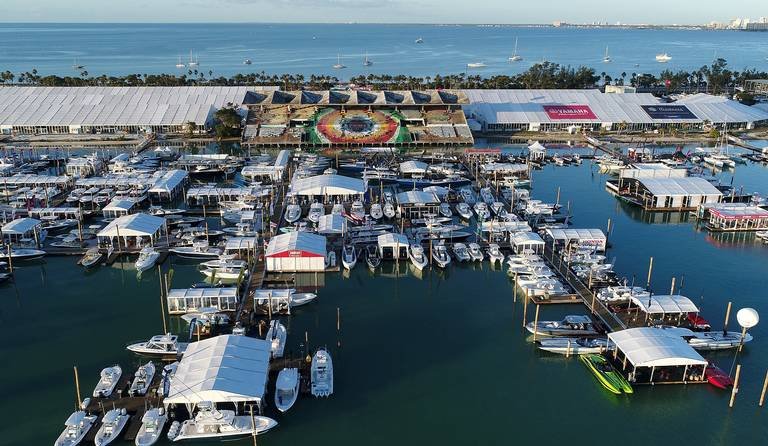 After years of dueling dates and locations, Miami’s three major boating shows will combine to create one annual mega-event starting in 2022. The Miami International Boat Show, the Miami Yacht Show, and Superyacht Miami will now collectively be known as the Miami International Boat Show. The event will be managed by Informa Markets — the largest exhibitor group in the world — with direction and guidance from the National Marine Manufacturers Association. Informa will continue to co-own the yacht events with the International Yacht Brokers Association, while the NMMA will continue to be sole owner of the Miami International Boat Show. Organizers estimate the economic impact of bringing the three events under one figurative roof at $1.34 billion — or “three Super Bowls” according to NMMA President Frank Hugelmeyer — supporting about 9,000 jobs and 100,000 hotel bookings.

“This will help grow the market in Southern Florida for many years to come,” Hugelmeyer said in an interview. Informa Markets and NMMA are also announcing they will open a new office at 1501 Biscayne Blvd. to coordinate other South Florida events, including the autumn Fort Lauderdale International Boat Show, which Informa also produces. Fort Lauderdale International Boat Show is owned by the Marine Industries Association of South Florida.

For decades, the boating and yacht shows — all of which took place during the same period in February, over Presidents’ Day — grappled with confused customers who bought tickets to one show thinking it would get them into another, only to be turned away when they attempted to cross over. The shows have also relocated numerous times over the years; most recently, the Miami International Boat Show was held at Marine Stadium, while the yacht shows occurred at One Herald Plaza and Island Gardens Deep Harbor on Watson Island. “It’s now going to be seamless for the consumer,” said Andrew Doole, U.S. Boat Shows president at Informa Markets. “So now they will get a single message, not two messages on two websites. There was so much confusion in the past, with people ending up in the wrong spot and struggling to figure out how to plan their trip. So it should be a much more enjoyable experience.”

Under the combined format, on-land exhibitions will take place at the Miami Beach Convention Center, its home since the late 1960s (the show was inaugurated on Key Biscayne in 1941).

“The show is returning to its birth place,” said Bill Talbert, president and CEO of the Greater Miami Convention & Visitors Bureau. “But it used to just be a concrete box. Now, it actually breathes. And it got the highest marks from the NFL (after it hosted Super Bowl LIV in 2020) — and they’re a picky bunch.”

The shows are canceled in 2021 due to the pandemic, along with the annual Art Wynwood fair — also owned by Informa — normally slated for the same weekend. All are scheduled to return for Presidents’ Day in 2022. The yacht show portion of the boat show will run alongside Art Wynwood at the One Herald Plaza location.

In-water events and attractions will be located at Sea Isle Marina and One Herald Plaza, both adjacent to the western terminus of the Venetian Causeway; and Island Gardens on Watson Island. Transportation options will include water taxis, ride-share hubs, and public transit access, in addition to ample parking.

This story has been updated to clarify the date and location of the first incarnation of the Miami International Boat Show.